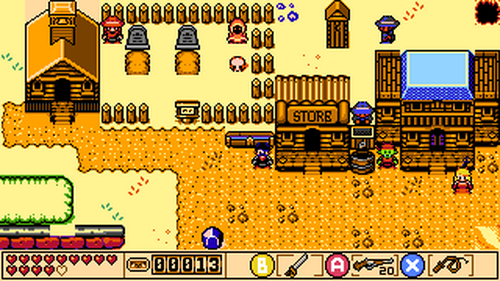 I dunno if anyone remembers me learning to program 4 entire years ago but I went back to the Zelda well sometime in December and I've been plucking away at it in secret for a month and a half and I'm apparently 56% feature complete (according to my list, anyway). And seeing as it's screenshot saturday prepare for a dump! 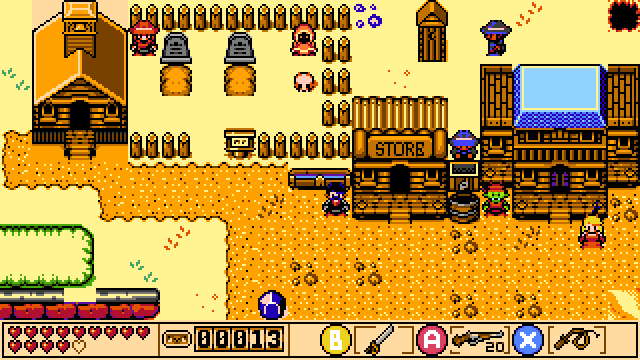 Uh so I'm putting together a quick little Link's awakening clone with some western themes. Possibly with some Bravestarr-like shit in there. Maybe not the talking horse but whatever I'll figure that out later.
I've got plans for different genders and skin tones for the player, along with entering your name but I wont get to that until I have all the base player stuff done.

Sword attacks, charging a spin attack and some other sword stuff. You are a cowboy with a sword.

I made a whip that works like the hookshot in Link's Awakening, because I was like "Cowboys would have bullwhips" completely forgetting the AAA Rockstar game I spent the start of November playing that featured Lassos super heavily. But screw it he has a whip. Also there's a UI glitch that I only just noticed!

Finally here's some dialog. It loads from an external txt file and does some pretty things if I want it to. Plus it switches your control prompts when you're able to talk.
As for why I dumped Lifter again. I uhh, I broke fucking collision again. I since fixed it (yesterday) but I really needed to work on something were gravity wasn't an issue for a while. Despite it looking pretty ok in footage it's also a bit frustrating to control, in a way that isn't hard to quantify really, but the biggest culprit was a bug that magnet stuck you to some floors if you only took a short hop onto it... It's ugh.. It's a shame because I was almost done with it again but I just can't handle how GMS lets you either have the hardest collisions ever or it lets you clip into everything and there's no real middleground.