Hi it's the middle of April somehow? This might be a hard one to recount, just because time in a lockdown is so weird. Well you all know that. Being stuck indoors is really really messing with my dust allergy, so when I haven't been ill I've been... well sick! I'm also torn between working on this and spending time with my Partner. The pin fell out of my laptop's power cable and I have to wait til May for a new one to show up so i can't just drag that into the other room to hang out or work together which has really reduced how many hours a day I can spend on this. Ah well it's not my real job, and progress is steady :D

Luckily I make so many gifs that I just started naming them the date they were created on so lefts go over my notes and stuff.

Ok so the start of April was a huge huge bugfix week for me.  Lots of small things like you not facing the right direction when you load a game, enemies not touching the player ever. Things like that. Boring hard things that are hard to show off NEXT! 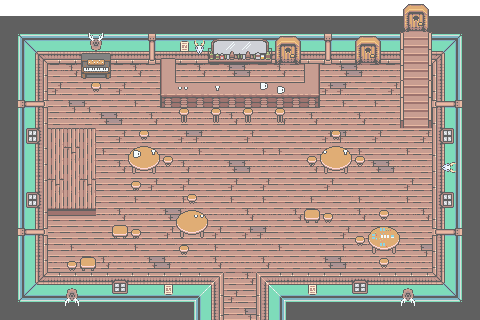 The town is growing slowly, with a few secret caves here and there. This is my first attempt at the saloon interior, which actually has already changed since I drew this map.  I want some more modern-ish stuff in here like beer pumps and a jukebox and some other techy things to really mix up the feel. I uh.. need to do that for every area tbh..

I made this little guy. If you've played any of the 2D Zelda's you'll know his deal. He's basically an Octorok. My bestiary has a huge gap in it wrt to monsters that fire projectiles. I want to make a smarter projectile firer too. Things are way too safe in the game atm, though I'm not sure if that's because I've played so many games like this before? I HAVE gotten through all the combat encounters in game so far without getting hurt in one run, many of them without really being in danger so that 100% has to change for the next portions of the game.
Also yes that is his exposed brain meat.

He... had some difficulty with some new shield stuff later...

Around this point I did a big sound effect run. So a heap of things make noises. I'm going to leave out showing that off for the moment until I find screen recording stuff that plays well with Game Maker. but it's in there! I can call up sounds in Cutscenes now too!

Ok so this was a thing in my notes since January. Wandering ambient butterflies. This was meant as a warmup exercise on Tuesday and ended up taking 3 hours haha.

Here's a.. not a bug really but just something not working out right. The shield was way too powerful and as you can see here I had to work to get hurt. It was using some combination of states and checking where you were looking in relation to the direction of an incoming attack. Now it just spawns a hit box that turns off damage for attacks. Will this cause problems later? (YES)

Gearing up for Dungeon number 1. I want there to be more to switches other than opening the entrances to rooms. So first up was hittable switches.  Anything that is an attack will trip these, including thrown pots and blocks, which I don't show off here.  The bridges are a weird hybrid of a door and a pit object that worked perfectly the first time I tested them out and I'm honestly not trusting them.

Huge fixes came for the dungeon map display. They can be slightly larger now! WOW! And there can also be more than one dungeon! DOUBLE WOW. Now that I'd done tutorialising the switches and so on with Dungeon 0 I can get stuck into trying to slowly ramp up combat encounters on the way to Dungeon 1 and inside. At least, that's my intent. The dungeon atm looks like this: 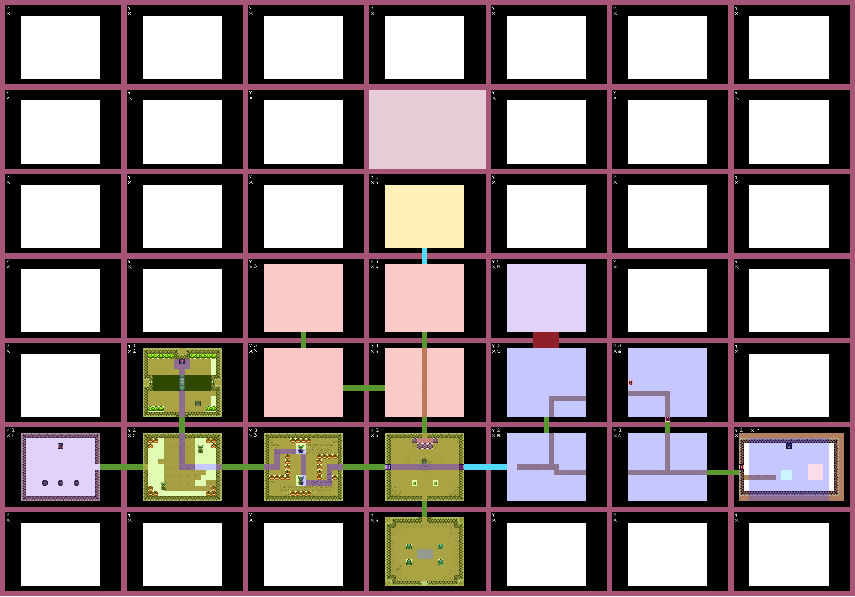 I'm trying to be smart about routing so it isn't as linear as Dungeon 0. We'll see how it goes!