This is where I fell into a hole of real life work, contract work and CHRISTMAS. I was also weirdly getting the flu a lot. It was miserable, I had it 3 times from September to January because I was travelling a lot and catching random strains of it in different places. That's... lucky I guess with what's going on now..

Any spare second I got I was thinking about this game and what to do with it. Storywise I still only knew "WESTERN ON MARS" and "THEY TOOK YOUR DOG". Designing characters became a slog, doing tiles was a slog. I'd outlived the Gameboy Colour look in a lot of ways. SO I FLUNG IT OUT.

Yeah. Dont be me, don't completely change the artstyle of a project you're a long way into while also incredibly busy AND sick. Maybe it's because I was sick and feverish that I just decided to do this, and to complexly redo every animation for the main character along with it's 3 skins. Who knows!

What I do know is that suddenly I was interested in the game again on more than just a technically creative level again. I had room to add features to sprites, While keeping everything still kind of lo-fi. Oh I also stopped using the NES palette right before this too. Which honestly is just more proof that I'm dumb and make poor choices, but this one looks nicer and is based on the 3 GBC Zelda palettes along with some other ramps I liked. 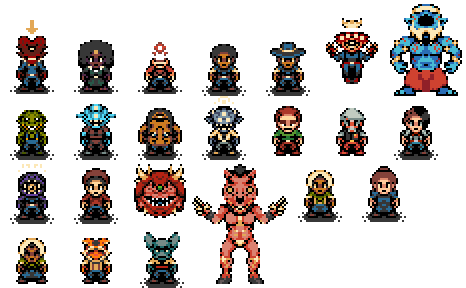 Here's a look at some newer ideas. Did I mention I love demons before? Well...

So with the new scale came the need for some bigger rooms! This was a big project to be honest. Took about a week of bashing my head against it to get the offsets right and to get it into my map system (both the ui map and the actual MAP map). I took advantage of this to resize the whole main town later, cutting the size of the town down from 24 rooms to just 6.

There was a weird issue where you could throw tnt you were trying to buy. It turned out a little later you could convert any item you were carrying into lit tnt and throw it by pressing the tnt button. A cool bug but it had to go!! 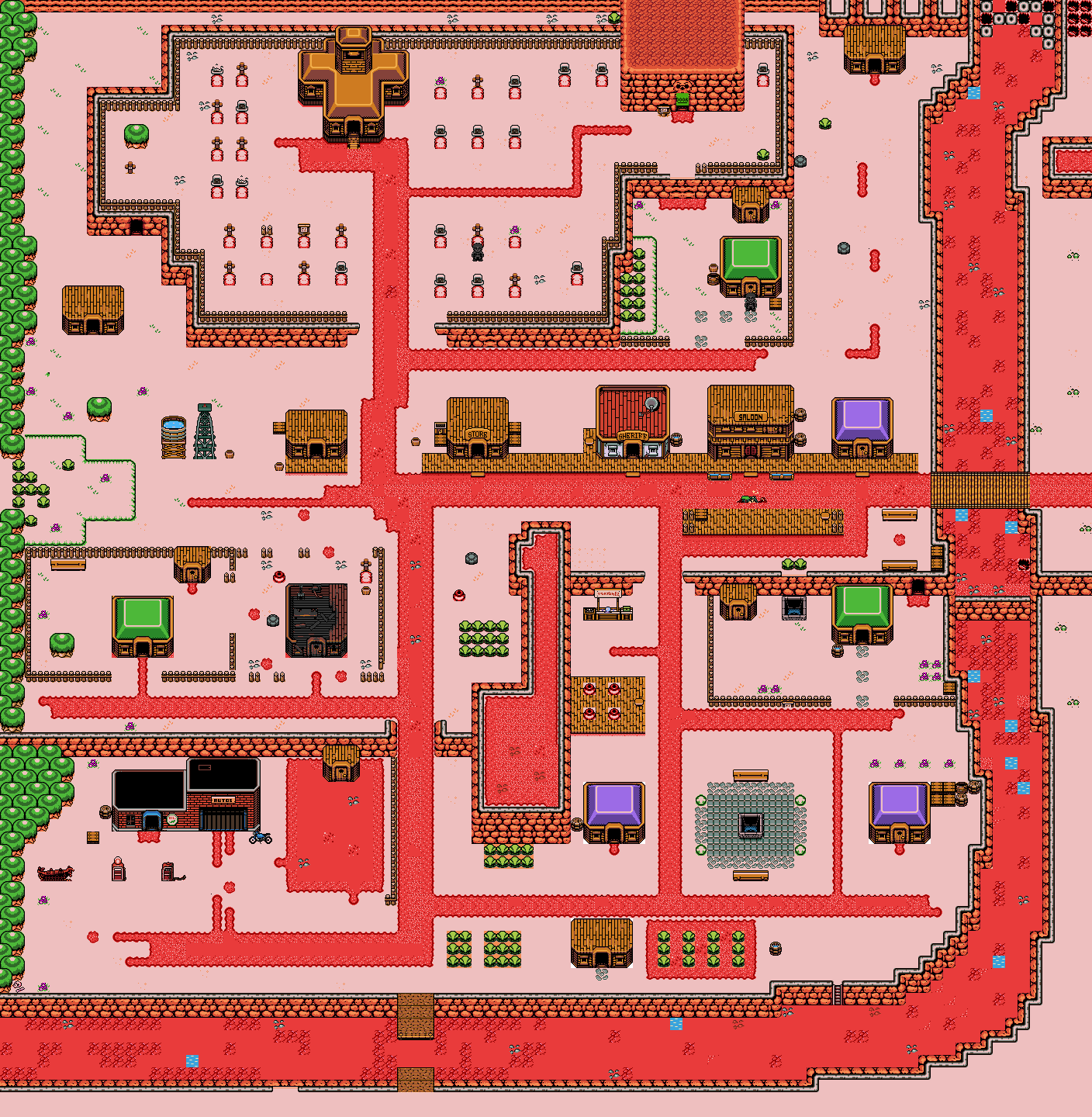 I can't show it off in a gif, because it was 15 MB but this is what Van Allen currently looks like in game. With the new tiles and all. IT's hard to get the balance between built up and messy right. I'll get there!

Just in case you think I'm a good game developer.

I took some time to concentrate on ways I could make the game feel... better. Movement was a big help last year but I'd neglected attack collisions for ages. I thought perhaps I was somehow being waay too generous with it but as you can see I'd somehow set the sword up to always hit things with it's entire bounding box, so things were bing hit by the sword before they were touched. And not in that nice forgiving good gamefeel way either

The new game menu got a big overhaul here. The placeholder menu for choosing your sprite and palette actually looks like a real menu, you can name your dog, and you can go over some gameplay options before you start. These save to your save slot now too so they are tied to your playthrough (you can change them all at any time). Plus your save slots display some of the more important options.

OH! At some point around here too I changed how hearts work too. They are now all half hearts. So you have a heap more health.

Dungeon 0 got a new layout that makes it a little bit more interesting and slowly introduces elements in a smarter order. Before you would learn about keys before you learned about doors for example. That's all super obvious so there's also a shortcut to the end of the dungeon for eagle eyed players. The map remains broke as hell, no idea why. I'll have to look into it. Here's the room where you get your sword.

I merged the behaviours of 2 different old enemies from older games of mine to make my first new enemy in like a full year. The FLYBALL.
They come in two flavors, a basic, bare eyeball that tries (poorly) to bash into you and the smarter, slightly tougher one you see here that orbits you and tries to shoot you. They are super slippy and dumb and bash off of you and the walls.

The final big thing I've gotten done so far this year is my cutscene controller. It's based off my dialogue code, but with waaaay way more options. Basically its a series of arrays with instructions that fire at the right time. It has the option to overwrite the player too, it can call up dialog and can trigger story flags. All kinds of stuff you'd want. I was playing a lot of Chrono Trigger seeing as March marks it's 25th birthday and that's more than enough of an excuse to play again.
The big thing though that makes this feasible is that I got it to populate an empty set of arrays FIRST before loading in all the new details of the event. That way if I want to I don't even need to leave an entry blank like with my dialogue entries. I can just skip them completely, which speeds things up sooooo much.

That brings us up to this week. Things are weird here in Ireland currently with Corona Virus. I'm still working in the tattoo shop but no one really knows for how long, most other types of businesses have either closed, have people at home or have given up. I might be out of work entirely for.. who knows how long. More time to work on this project, which is good but less opportunities to say... pay for food. Things are uncertain. There's something kind of romantic about being locked in your home working on something while things get gnarly outside but I'll see how I feel about that when I'm knee deep in it.

Looking at my notes here I'm moving on to the next area of the overworld. The forest located to the west of the town. I got the main enemies of the forest animated. They just need real AI before I go forward with it. It's been nice to map out an area with green in it!

After that is the first real dungeon, located in the same forest. That's a bit of a way off. After that I think I'll put a pin in it and release a demo. Possibly for free but who knows what state anyone will be in at the time???

On the technical side I really really want to get into the guts of my dialogue system and add some way of drawing button prompts in there. I wrote it some time in..2018?? And back then I was just flinging huge sprites into the middle of text and it just wasn't working.

Asides from that everything else is content and tweaking. There's a gap in my enemies so far that needs filling. There's some really dumb bugs that I need to fix. I could see about maybe adding more than like 6 sound effects too!

There's still HEAPS to do